The Wham Ridge on Vestal Peak has been on my list for a long time. Finally this past week, Dave Rasmussen and I made a quick trip to see about climbing Vestal peak via this route as well as some other peaks in the area. As it turned out, the weather was good to us for the most part and we got to climb all 5. 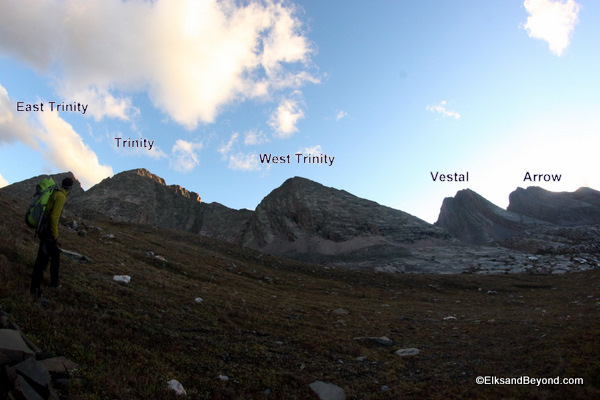 The objective of the day.

Our trip started out on Tuesday evening, attempting to drive to the Durango area to catch a few hours of sleep before getting an early start from the Molas Pass Trailhead. A stick got thrown into our spokes when we arrived in Ouray to find Red Mountain Pass closed for nightly construction work. We hit up the campground there and headed over first thing in the morning in rainy and windy conditions. We figured we would wait it out and hit up some breakfast with one of Dave’s friends in Durango. The longer we waited, the more lazy we felt, and in the end bought a last minute train ride in to Elk Park. 27 minutes down the tracks and we were alone. It is an interesting feeling having a train drop you off at the trailhead. There is just something different about this sort of access than hopping out of the truck and throwing the pack on.

We hit the trail about 3 pm and headed on up the Colorado trail for the first few miles until it was time to turn off on the climbers trail up Vestal Creek. Here we were greated with a gorgeous view of Arrow and Vestal peaks far above. 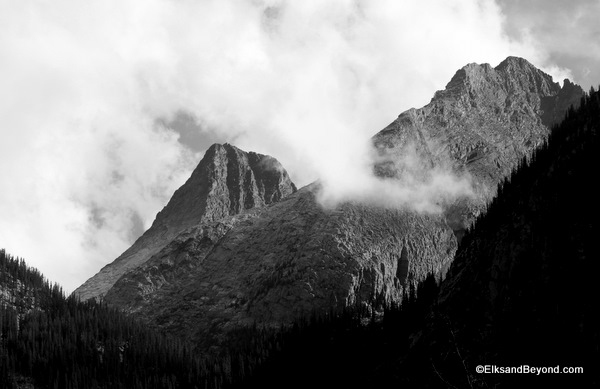 Vestal on the left, Arrow on the Right.

Another couple miles of hiking brought us to a meadow at 11,400 feet. It had started to rain by now, so finding a decent campsite became the priority. After talking with another group camped in the area we found a spot up on top of a cliff band in the trees. We set the tent up as quickly as possible and crawled in for the night. 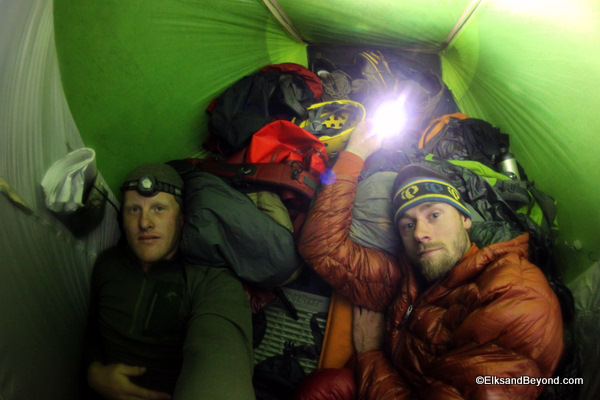 Finally out of the rain.

The rain continued on and off for the majority of the night, along with many a gust of wind. Finally our 6 am alarm came, and there was very little motivation to go out into the now howling wind. We waited until about 8 am when the wind seemed to die down. Up high the clouds were still blowing by extremely fast. It was our hope that this was a sign of the system blowing out. We cooked a quick breakfast and started up the faint trail leading towards our first objective of the day, Arrow Peak. 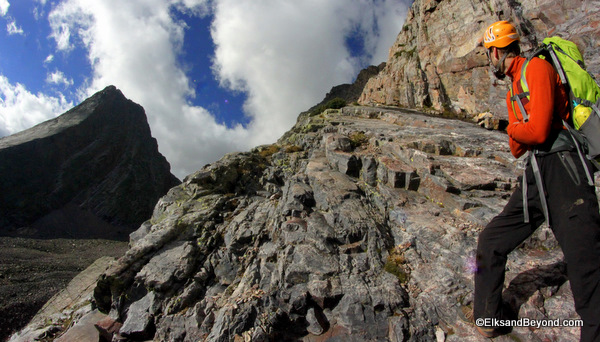 In no time we reach the ramp that holds the route to the top of Arrow. The ramp is a rather entertaining climb, the majority of it is on solid sloping rock, with sticky shoes it is easy to walk on up it. 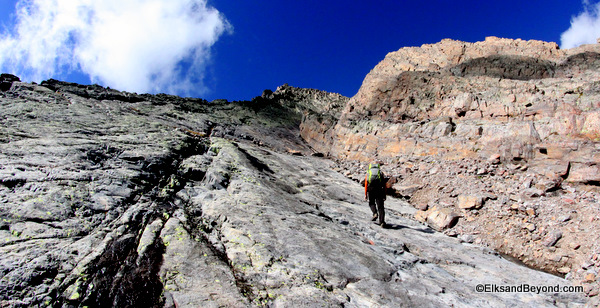 Towards the summit the climbing turns into class 3 and 4 if you don’t stay right on the route, we weren’t shying away from the harder climbing, so we didn’t find it to be too big a deal. A quick snack on the summit and we headed back down. 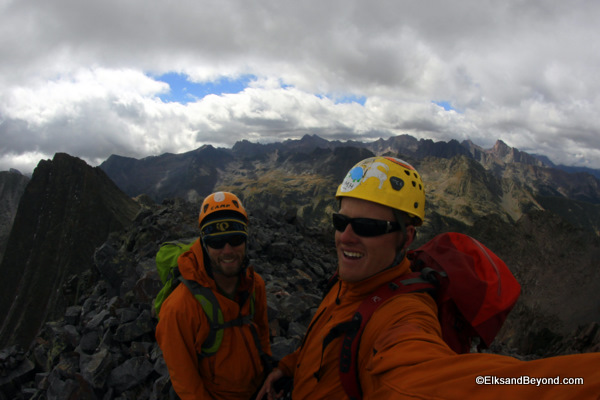 We found ourselves back in the basin about 35 minutes after leaving the summit. Since our goal for the day was to at least climb the Wham Ridge, we dropped down a bit farther and headed up the direct start which is supposedly class 5.3…we didn’t find it to be worthy of pulling out the rope so we continued on up the lower section of the ridge. For the first few hundred vertical and headed for a crack that looked like fun climbing. At first we thought it may have been the center shift (5.7) and pulled the rope out, only to realize that it was probably in the neighborhood of 5.1 or 5.2. We packed the rope back up for good at the top of this short pitch and continued to free climb the remainder of the ridge. The climbing was fun and exposed in spots and was solid for the majority of the climb. 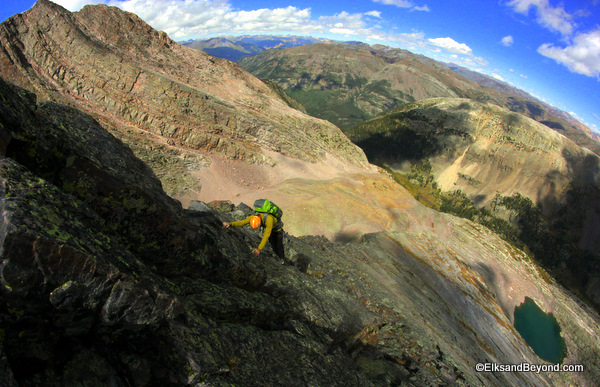 Probably one of the harder sections on the Wham.

We topped out to a stiff breeze, but the sun was out and we were feeling good to go for more. Another snack and we are off to give a go at West Trinity. The trend for the rest of the day became apparent, descend a loose gully and climb back up on solid rock.

Down the gully and across the mostly flat ridge to the base of our next climb. We got to climb up on class 4 and 5 rock, mostly just because it seemed more fun than the class 3 option. On West Trinity’s summit, the weather had remained clear, and the prospect of getting all the peaks done seemed to be more and more likely.

We realized that we had to get moving to finish while it was light out, so we headed on to Trinity. This provided some of the most fun climbing of the day with some class 4 chimneys and climbing along the ridge with good exposure on both sides.

Looking down at Balsam Lake on the way to Trinity. 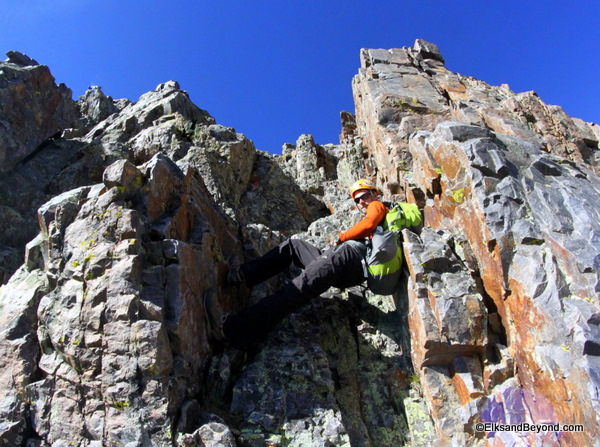 Dave relaxing in the Chimney

On the summit we looked across to our final climb of the day, East Trinity. 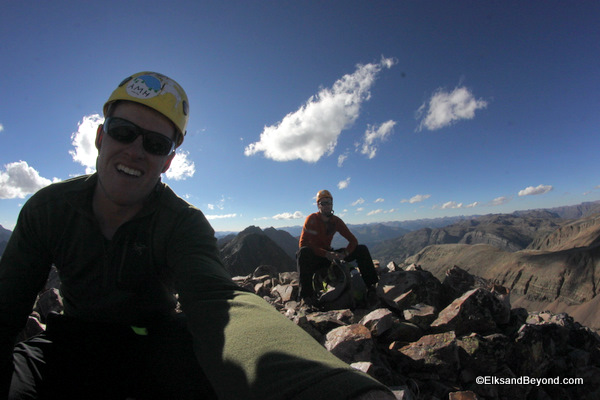 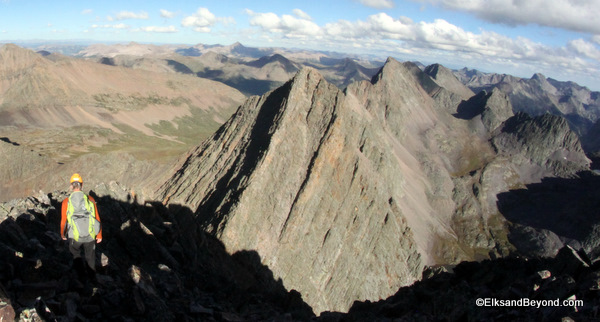 The final ridgeline to our final summit.

To say the least, this ridgeline looks imposing and intimidating. We were excited and made our way down to the last saddle of the day. While the standard route follows a west facing gully here we opted to seek out more solid climbing and easily managed to avoid all of the choss fest that the gully contained by climbing closer to the ridgeline. We reached our 5th summit of the day somewhere around 6 pm and took off towards our descent route back into the basin. 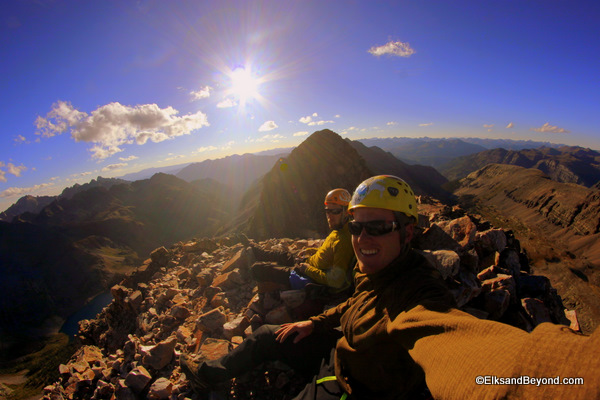 Our final summit on the day. 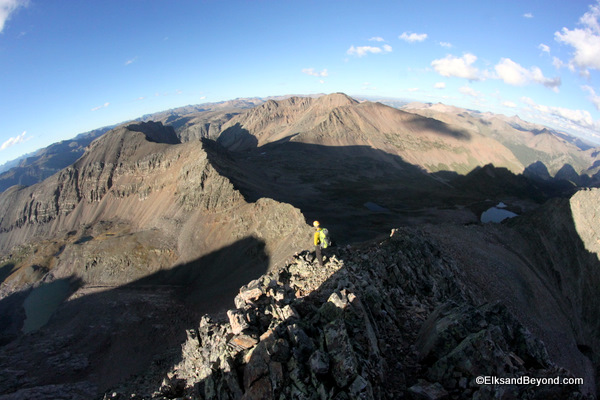 The last ridge down was easy hiking.

Trinity lake provided a good place to stop for a bit, and even a quick foot soak before heading back down the last couple miles to camp. 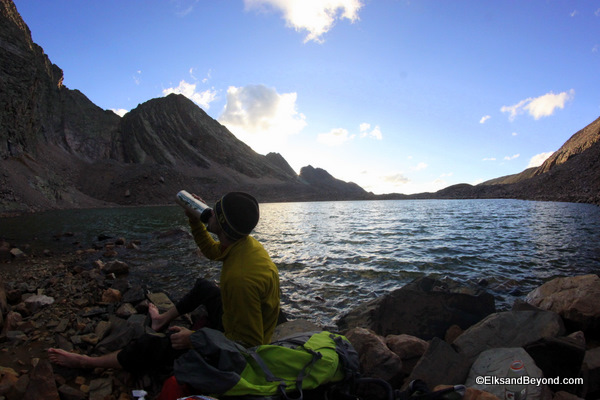 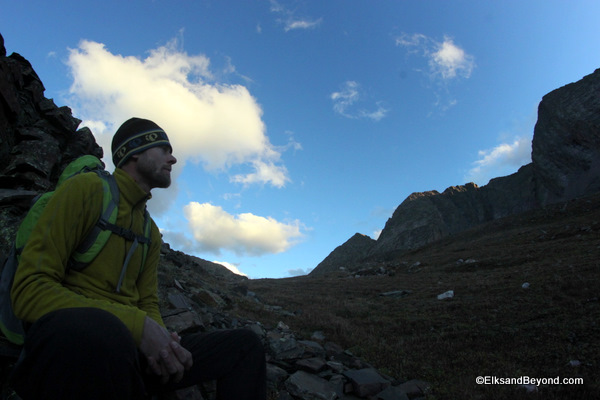 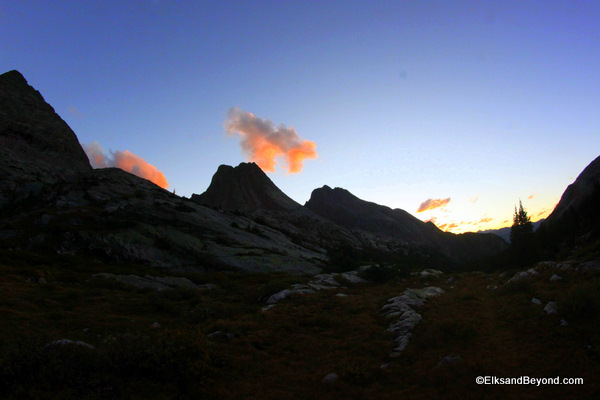 I'm not sure we could time it better for the sunset.

First step was to get some dinner going! Oddly enough we didn’t feel particularly tired, and spent a while playing with cameras and the stars. It was a whole new world getting to hang outside of the tent for a while. 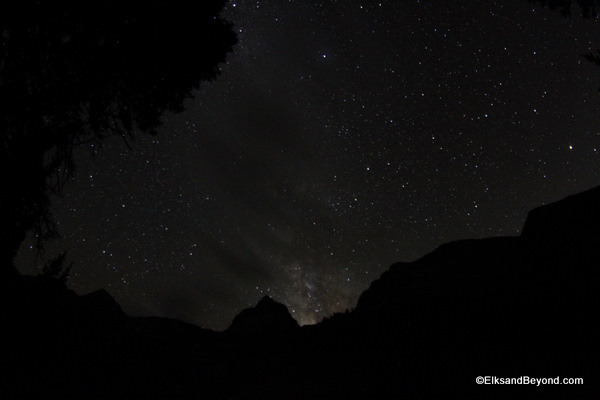 Climbing all 5 in the same day left the only goal for Friday being that of making it to the train on time. We got up and packed up and headed back down the trail towards the Colorado trail. Making a left we soon found ourselves at the train tracks with time to spare…now why didn’t we leave beers here? The train picks up and we are back in Silverton a half hour later and on the road home.

This was without a doubt one of the best days of climbing I have had in years, and I sincerely recommend this area to anyone looking to explore a more remote area of Colorado. There is no doubt in my mind that I will be back to this area again.

Thanks for Reading,
JW

Fall Day on Capitol with AAG