It’s April 27 and it is once again time to head off to Alaska for what has become almost an annual tradition. This time the crew includes Anton Sponar, Aaron Diamond, Riley Soderquist and myself. We travel by car from Aspen to Denver and then we are on a plane from Denver to Seattle and on to Fairbanks. Our flights land early enough that we are able to get the majority of our food shopping done in the afternoon. We headed to bed early as Fairbanks is not a particularly lively city. April 28th went much the same way as we packed food and gear and made a couple of quick trips to the stores for forgotten items. We had one last hearty meal at the Pumphouse and back to bed in preparation for the following day.

Our trips were being blogged live on Wildsnow.com, and you can find most of those posts HERE. We had a quick lunch at the Crepery on the 29th and headed to Delta Junction. Our pilots weren’t ready to go yet that day so we spent the day at the pool haul shooting pool and eating mediocre food, at least the beer was cold. If you can help it, try not to stay in Delta Junction overnight. If we had it to do over again, we would probably just sleep out at the bush plane site. We don’t know what the history of our hotel room was, but it was nearly a scene from a horror film, with finger scratches on the door and weird very hollow walls. I’ve stayed in a lot of hotels and motels and peoples houses in many 3rd world countries and this might be just about the worst I’ve seen.

April 30
6:30 AM wake up call and we each grab the last shower for a while on the way out the door. We popped a few miles up the road to Golden Eagle Outfitters hanger and dropped Aaron and Anton off with some gear for the long flight to the south side of the glacier. 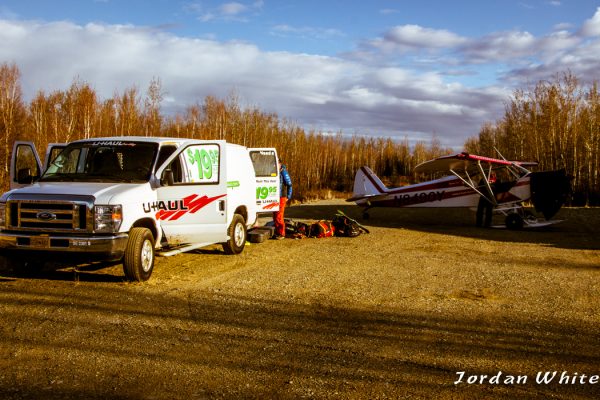 Rental cars in Alaska are expensive. Uhaul trucks stay the same price, so as an expedition hack they work great for carrying lots of gear and people.

Riley and I hopped back in the Uhaul to drive 40 miles over to the Black Rapids landing strip right on the edge of the range to allow for shorter bumps onto the glacier. Riley and a full cub of gear made for the next trip. I sat there at the ancient deserted looking landing strip waiting for the last bump in to the glacier. 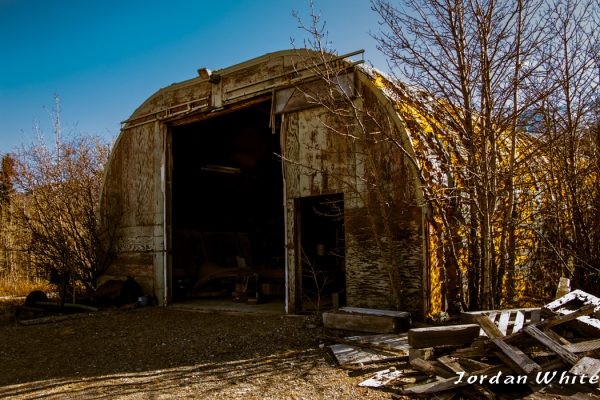 Another hour passed and I found myself cramming into the back of a supercub and making the last 20 minute flight into the upper Susitna Glacier and the base of Mount Hayes. We lift up in a matter of feet and soon are passing the end of vegetation and gliding over the dry toe of the glacier. The farther we travel the more the mountains grow in size and intensity. Potential ski lines are everywhere I look as we turn up the glacier to our landing zone.

Soon Mount Hayes comes into view and near the base I can see my partners and the beginning of a camp being set up on the glacier. We finished setting up camp and sat and watched as the clouds rolled by and the day turned to night. As it got a bit colder outside the clouds dissipated and we got our first clear look at our objective touring 6,000 feet above our head, and that was just the false summit! Some under hydrated veggies and off to bed for the night with plans to check out snow conditions tomorrow. 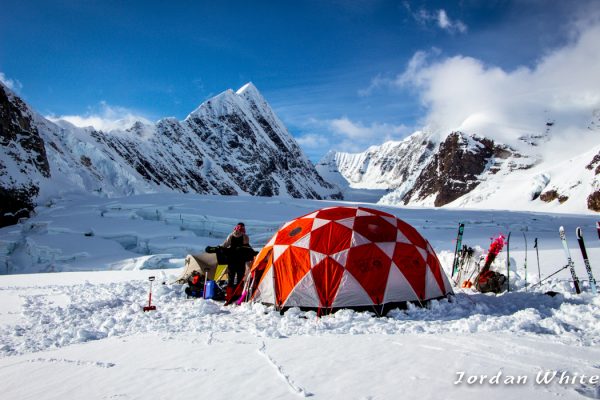 Home for a while. 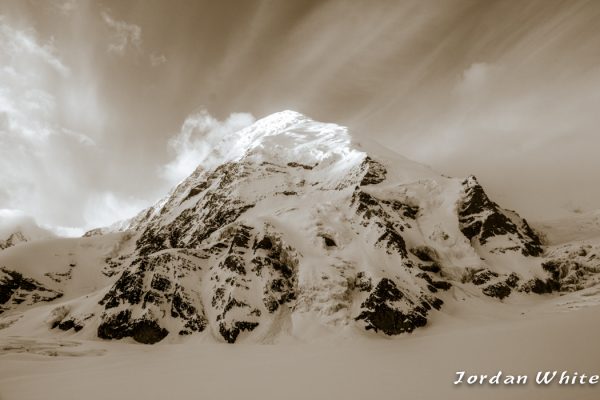 The south buttress of Mount Hayes. 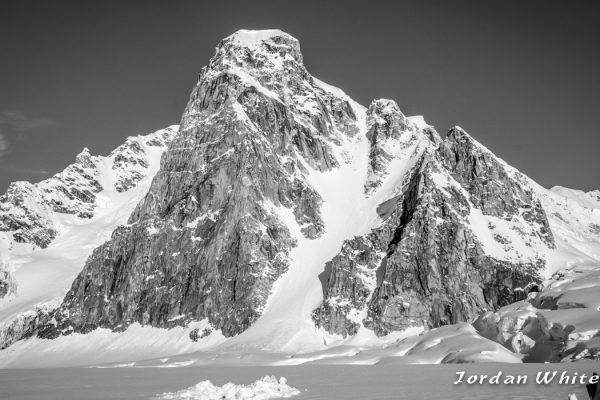 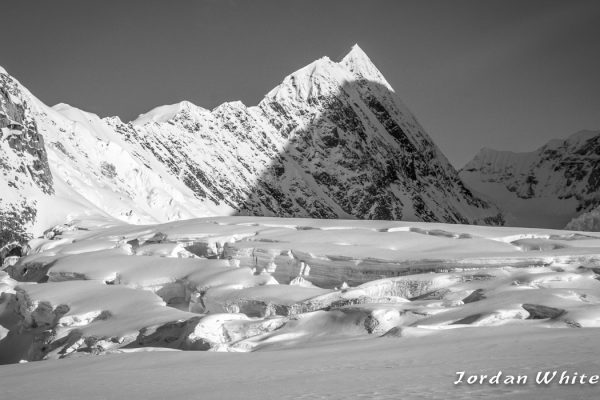 We had a week long debate on whether this was skiable or not.

May 1
We woke to beautiful clear weather this morning and had breakfast before heading out for the days work. We headed out for a super short tour to stretch the legs a bit and see what was happening with snow and avalanche conditions. We walked about a half mile up glacier and dug a pit where we found a bit of a crust 4 inches down and somewhat reactive. Riley and I continued over the shoulder and took a look at a big icefall before traversing over to a mellow glacier and skiing back to camp all before the crack of noon. 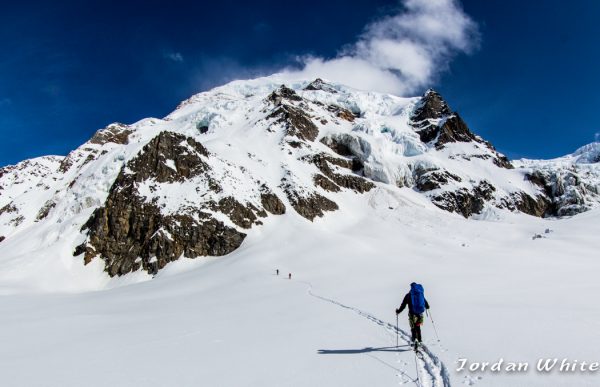 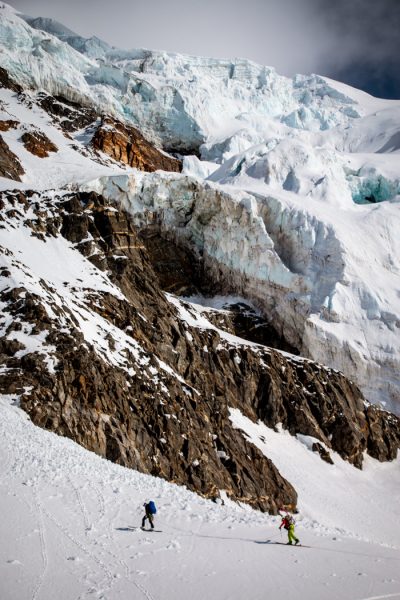 As close to and as high as we would get on Mount Hayes this go around. Photo Anton Sponar

Clouds moved back in and shrouded our goal with thin wispy layers. Later in the day we watched as a large amount of snow and ice came pouring out of the clouds. Chalking it up to another calving piece of glacier we went on with cooking dinner and making water to give a try at the route the following day. As the night turned colder the usual retraction of clouds brought Mount Hayes into full view. Problem is, it also brought into full view the massive crown that the falling snow had created, right in the middle of our route. Being as the crown was still 4,000 feet above us we estimated it must have been in the range of 6-10 feet deep. Obviously this changed our plans for the following day and instead of a pre dawn start we backed off to the lazy mid morning start and turned our attention elsewhere.

May 2
With that crown still lingering in our minds as well as in plain sight, we went for a tour up to some fairly mellow but still glaciated north facing terrain. We had some great fast powdery turns all the way back down to camp, all of us thinking the same thing; our hopes of Mount Hayes are over for this trip, so lets ski what we can and head home. 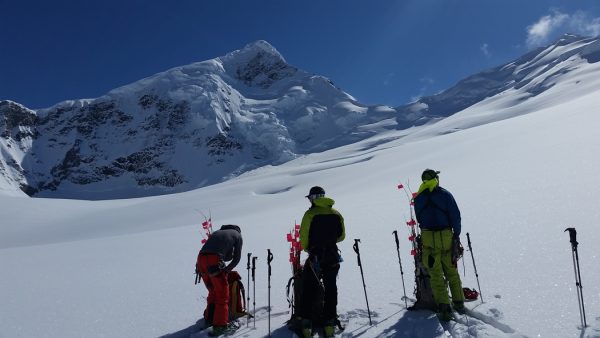 What a day. Photo Riley 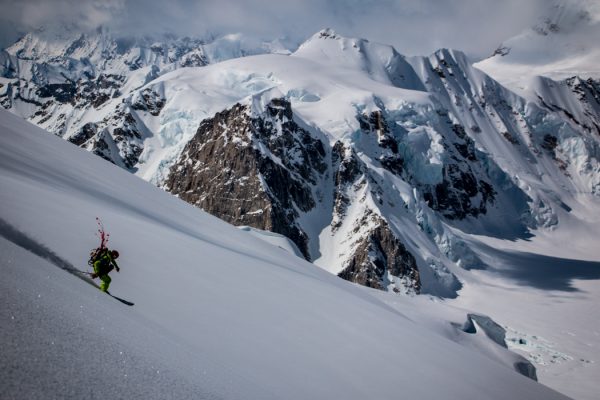 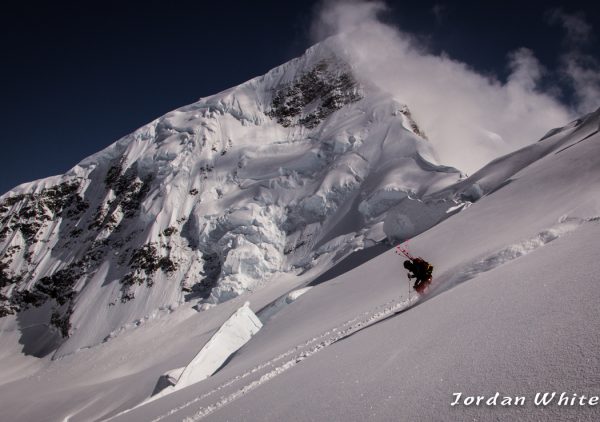 Anton making the most of the trip.

May 3
We went for a quick tour up to the west of camp to have a look around and see if there might be another ski route up there and then backtracked back towards camp after finding little worth climbing. Farther to the east of camp we found some fun terrain and after a lap, Riley and Aaron stopped to do some top roped glacier ice climbing and Anton and myself went out for another little tour of some glaciated terrain a bit lower down. Coming back around we found them still climbing and stopped just in time to see Aaron climbing with one axe to retrieve an accidentally lost axe still stuck in the ice above him. Entertaining to say the least. 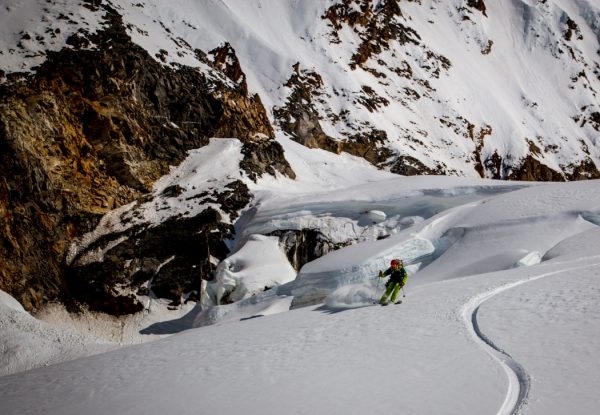 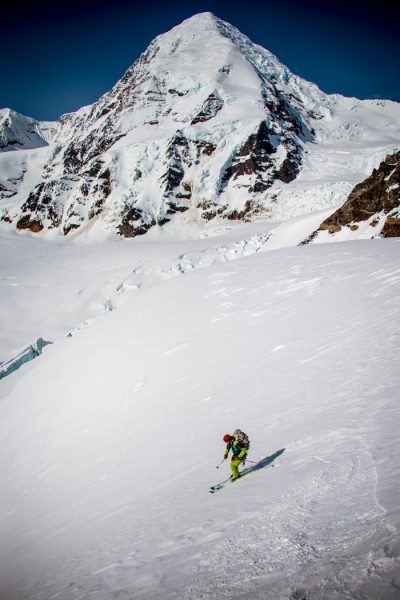 Mount Hayes looks on as we ski everything but it. Photo Anton 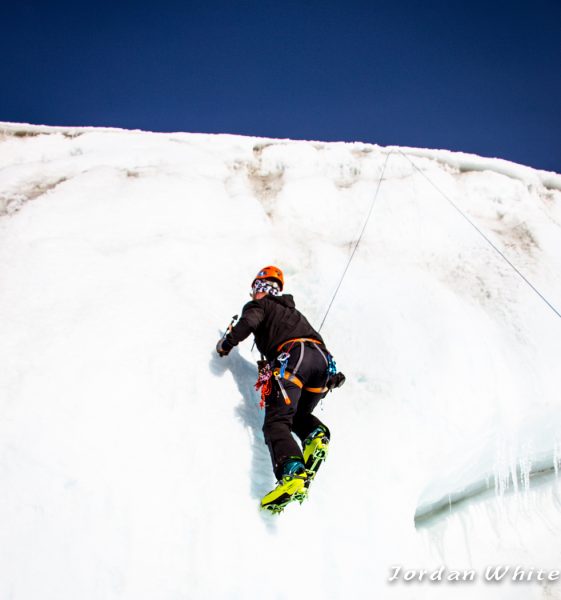 Aaron is a top rope hero!

May 4
With Anton and Aaron’s motivation dwindling, Riley and I took off southwest towards a very wide and steep couloir that looked like a fun descent. We toured over and skinned up about half of it on snow soft enough to hold a skin track before bootpacking our way to the top as the angle neared 50 degrees. Fun soft turns all the way down had us grinning and talking about what may have been the best skiing of the week. We used the rest of the day to communicate with the bush pilots and get ready to leave the following day in front of a brewing storm. 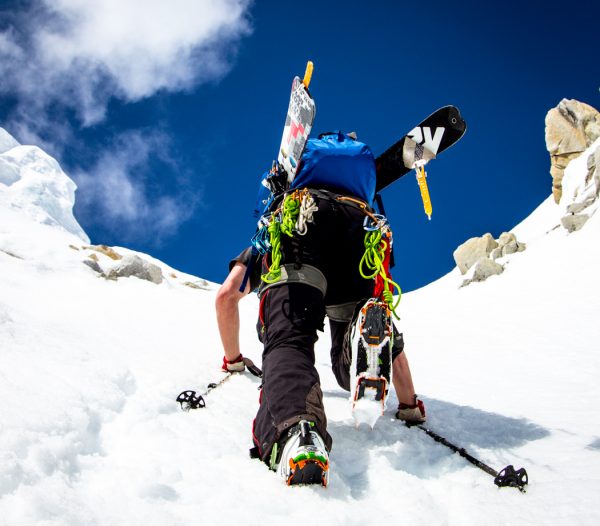 Riley taking the booter to the top. 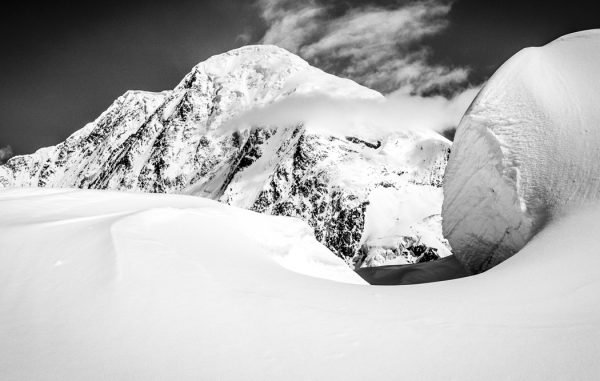 Obviously our eyes kept drifting towards the original goal. 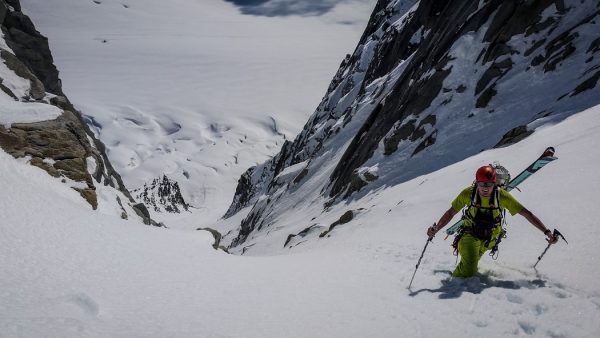 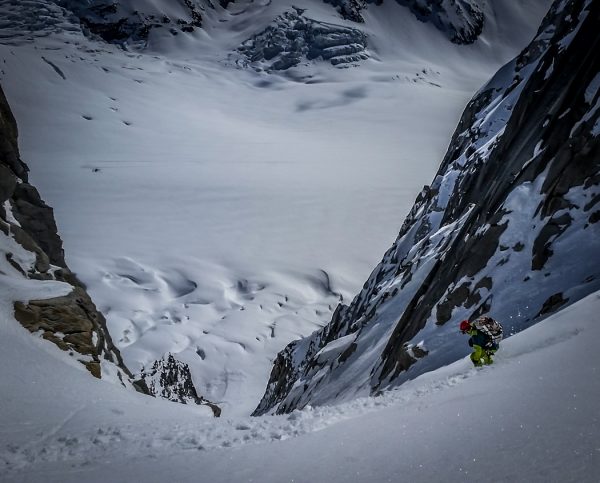 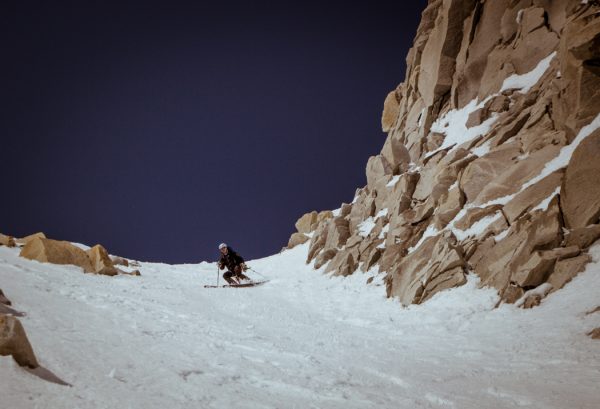 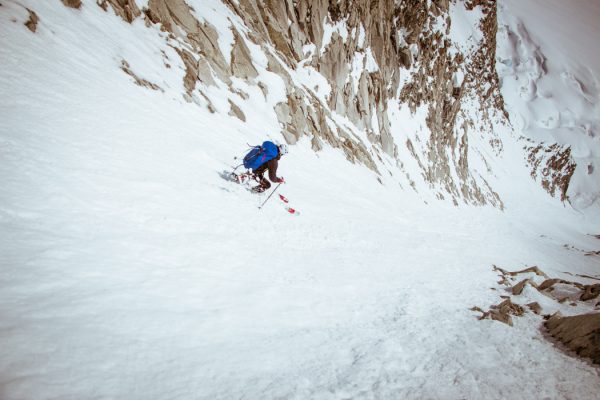 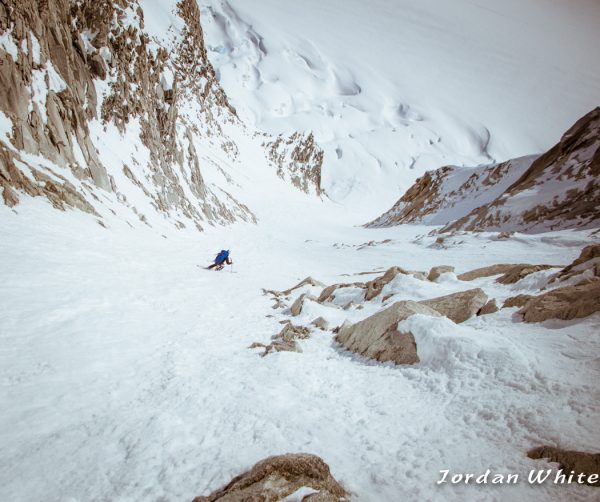 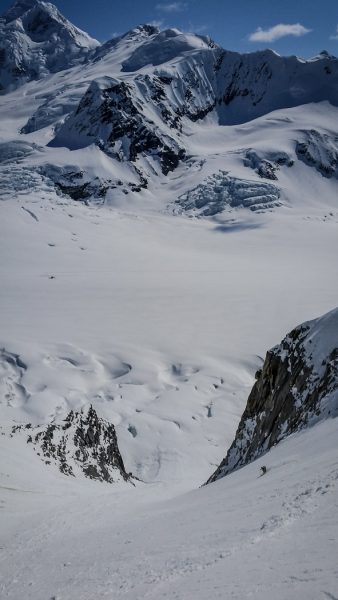 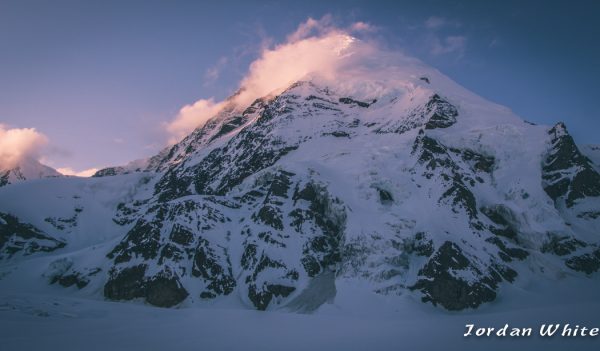 May 5
With camp packed up and deteriorating weather we wait for the bush planes to come in and reverse our first day all around. 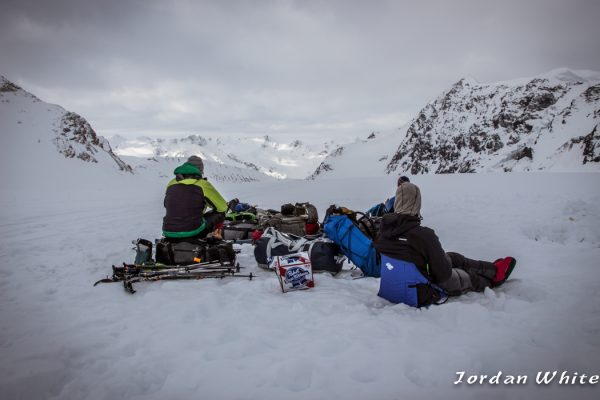 Just waiting for a taxi ride.

Mount Hayes gave us a pretty clear signal that its slopes were not ripe for the picking this year.