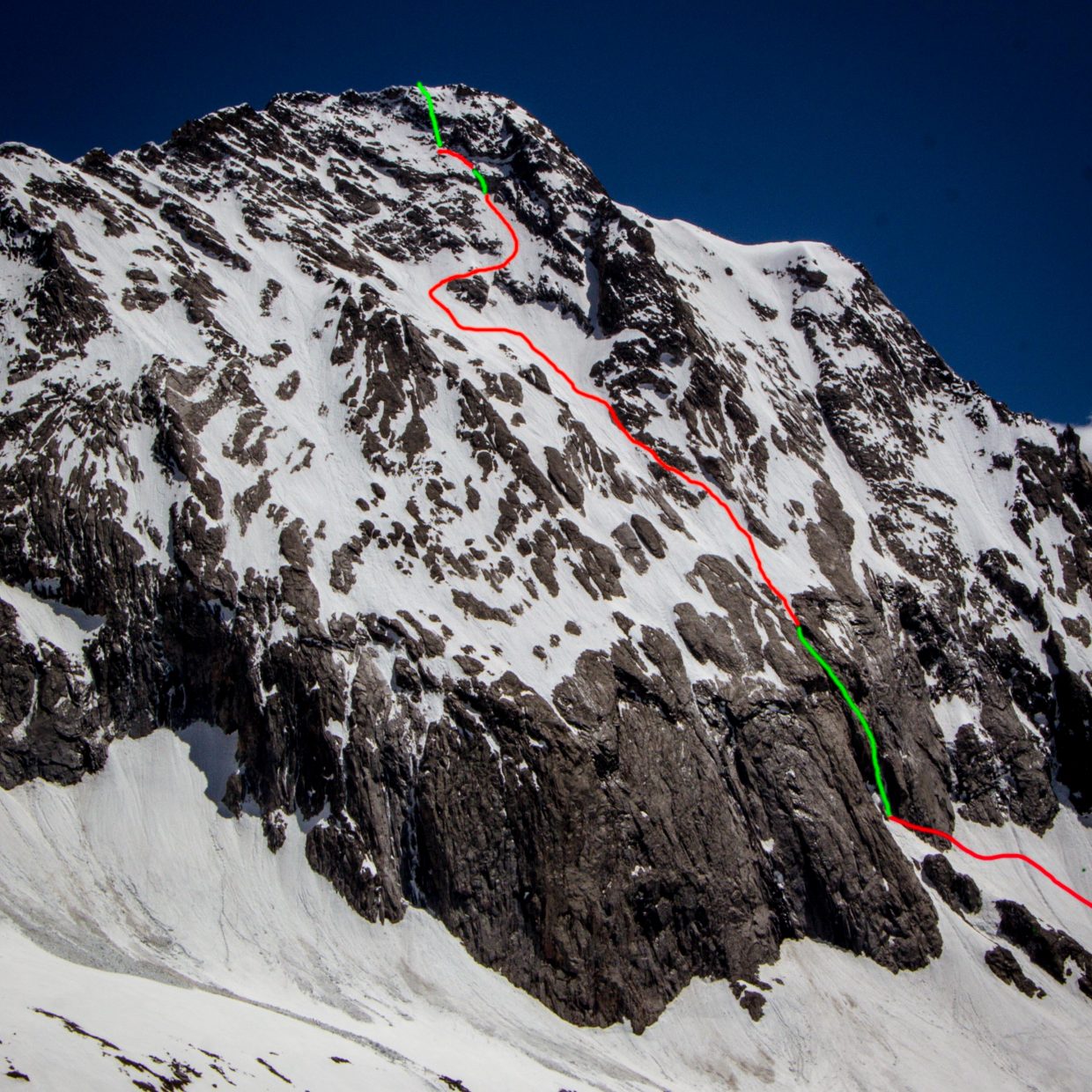 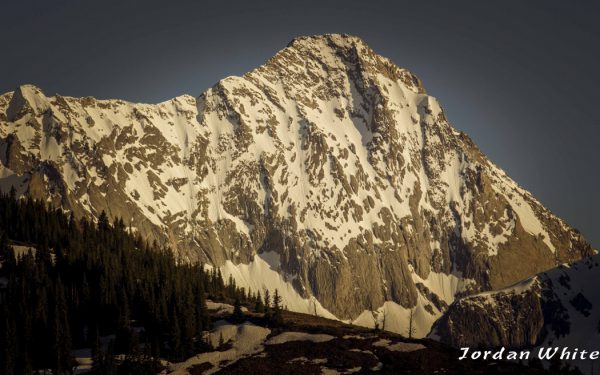 A little preview from the night before of our line.

Slayer… Or something similar. That was my first wake up call for Capitol Peak, only the blasting stereo from the approaching car came a couple hours earlier than we planned on leaving and as I rolled over to grab a bit more shut eye my mind started to work. This will be my 4th time on Capitol peak with skis on my back, but it doesn’t really get less stressful. My mind wonders… “Will the line go?” “Is there even enough snow to cover that slabby rock?” “Do we have all the right gear?” “Is midnight and early enough start time?” As Austin Porzak and his crews voices fade in to the night and it all goes quiet again, I drift back to sleep for a bit longer before my own alarm clock is ushering me out of my sleeping bag. Riley Soderquist is rustling with his in the next truck over, and soon Colter Hinchliffe show up with Adam Cachey and Brad Unglert who are planning to snap some photos from across the valley for us. We sorted some remaining gear and headed off into the night.

The approach to Capitol is a magnificent one in the first place, and when you combine such a beautiful valley with a full moon for the walk in, it’s hard to ask for more. Having stashed our heavy stuff the day before at snow line, the first 3.5 miles to the creek crossing go relatively quickly with light packs and the moon to light the way. At the creek crossing we leave our shoes and step in to our boots. Snow is inconsistent at this point and we choose to carry skis and walk in boots for the next half mile or so before skinning for good.

The rest of the way to the Capitol Lake and the Daly saddle were one big surreal experience. The moon was full and bright as could be, and even in the dense timber we didn’t use our headlamps. We found the other crews booter heading up to the Daly saddle and continued plodding in the moon light. Over the saddle we stripped skins for a moment and dropped in to the basin where we put skins back on and skinned all the way to the edge of K2 as the sun was showing itself in the east. 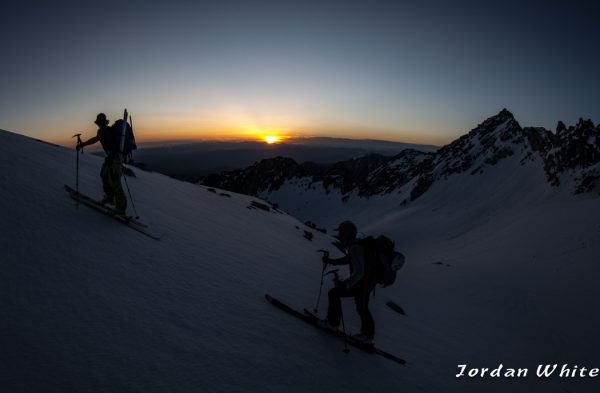 Colter Hinchliffe and Riley Soderquist moving towards K2 as the sun gets involved with our day. 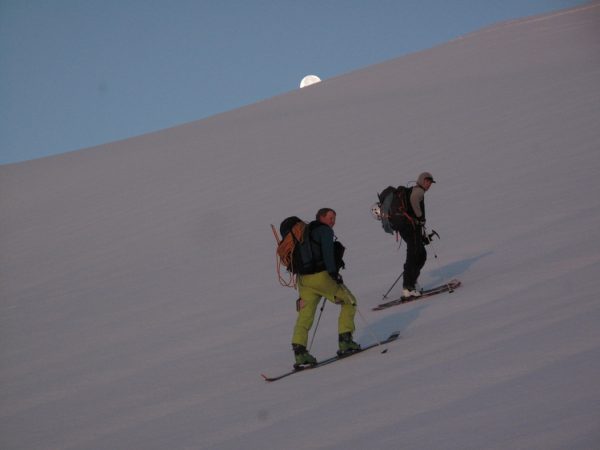 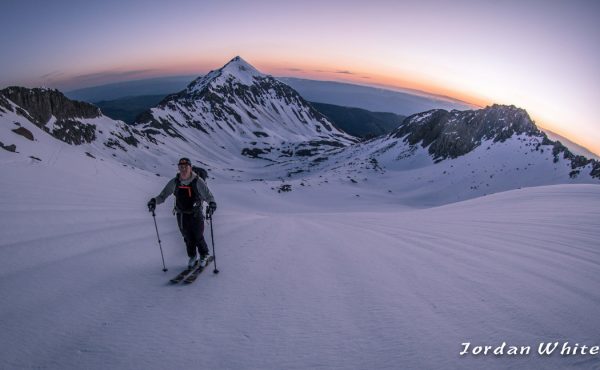 Riley in front of Daly as we come closer to k2. 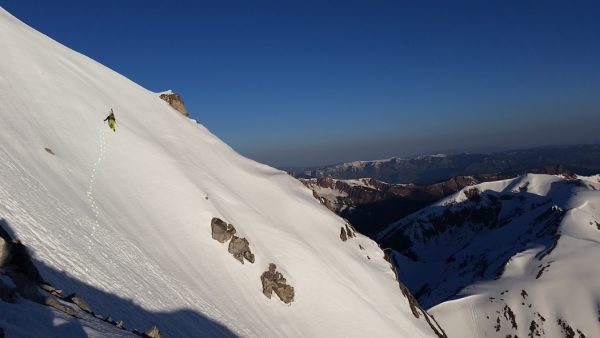 The familiar traverse around K2 followed by the knife edge ridge go quickly and easily with a sidewalk of snow making it easier than summer. As we passed the top of the secret chute we peaked down and saw Austin’s crew getting close to the top of the chute. We waived figuring we would see them at the top and continued up the east face climbing very steep snow. before gaining the ridge and continuing to the summit. 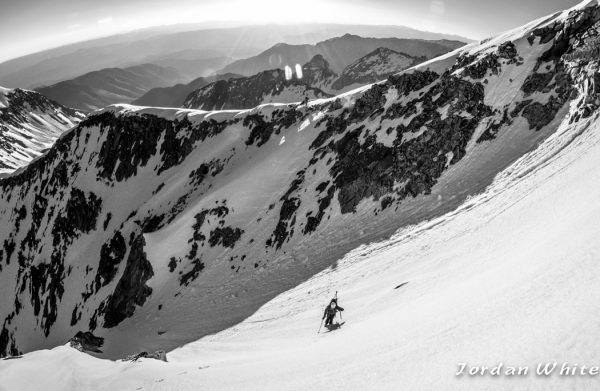 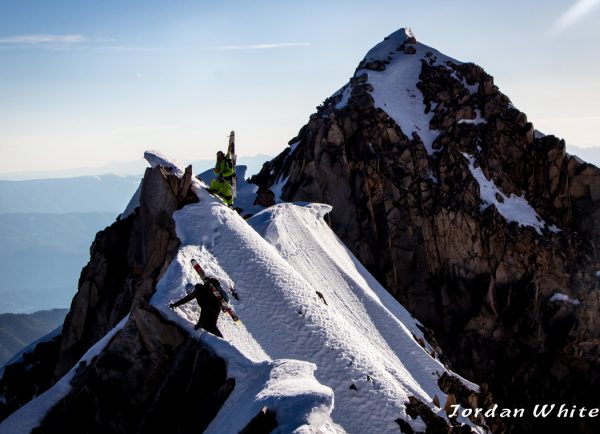 Traversing the ridge and on to the knife edge. 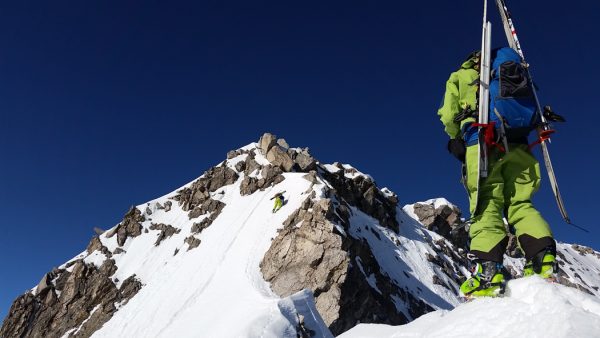 Colter looks on as I get close to gaining the final summit ridge. Photo: Riley 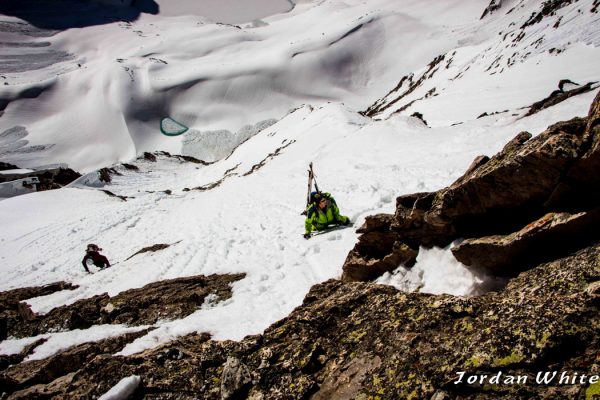 Colter and Riley making their way towards the final summit ridge. 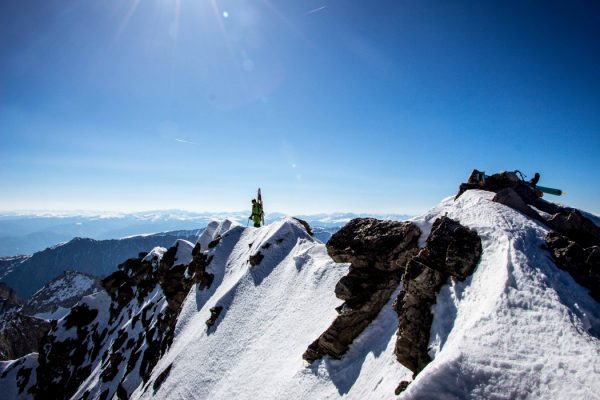 A bit later Austin and Jon showed up and we chatted for a bit. Having come up here with a few different options in mind, we were exploring the different options and eventually set ourselves to dropping directly in to the north face. Right off the summit we rapped off of a BFR. I went skis on, hoping to stay mostly on snow, but had an interesting section of vertical with skis on. Landing on snow, I came off of rappel and the other guys followed with skis on their back. 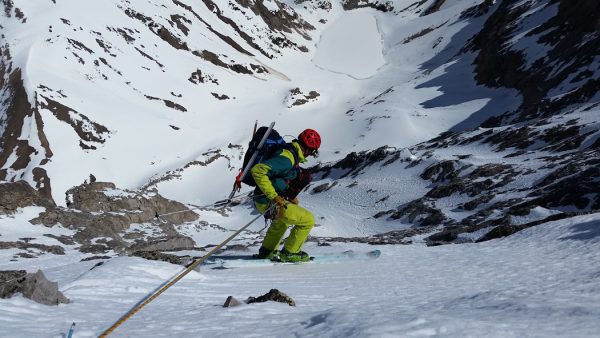 Straight from the summit. Photo Riley. 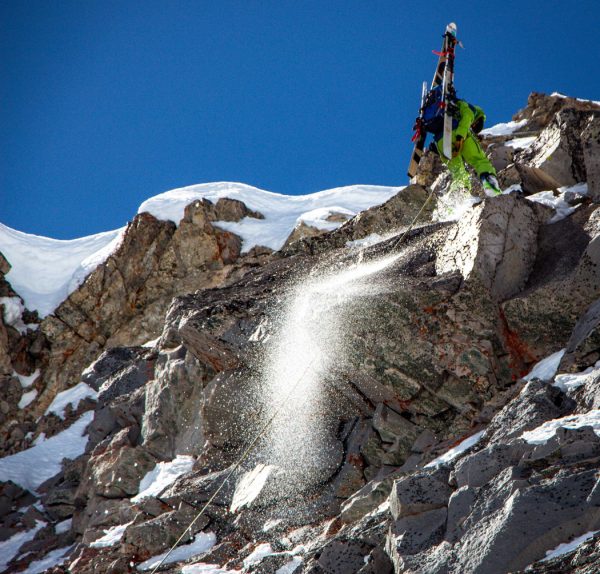 We skied down to one more choke that looked not quite skiable. This time everyone rappelled with skis on and we were left with a long steep, but fun ski to the cliffs edge at the bottom. 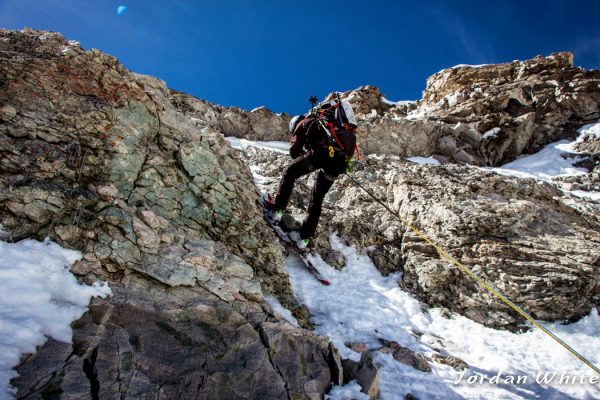 Just a week earlier and this little section may have gone cleanly. Riley rapping.

Calculated jump turns and cautious skiing had us making a long descent to the edge of the north face where we weren’t sure what our anchors would look like for a rappel. 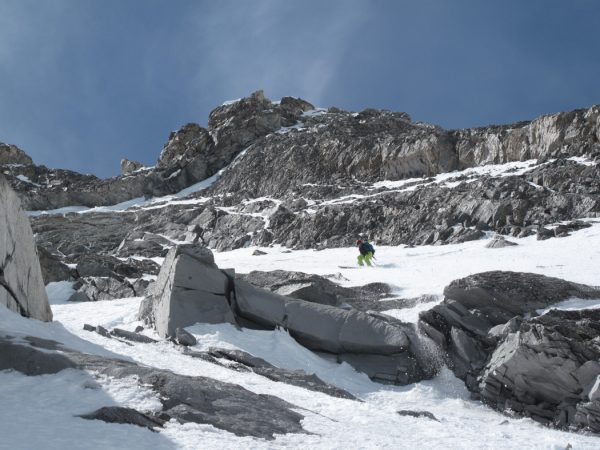 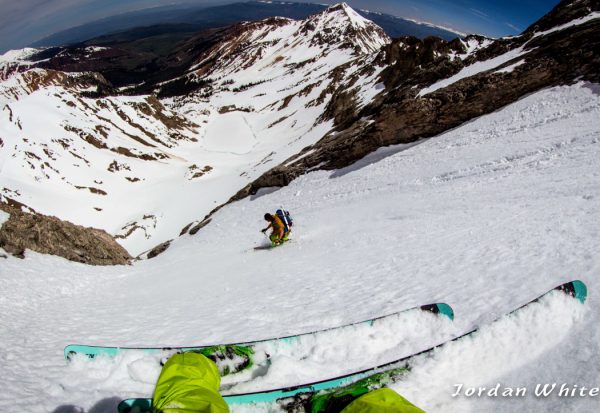 Colter dropping into the longest stretch of our descent. 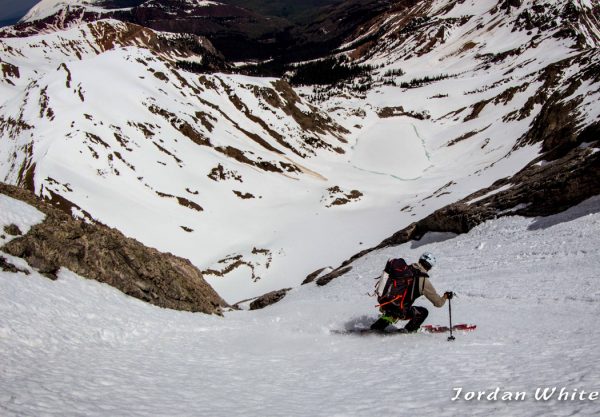 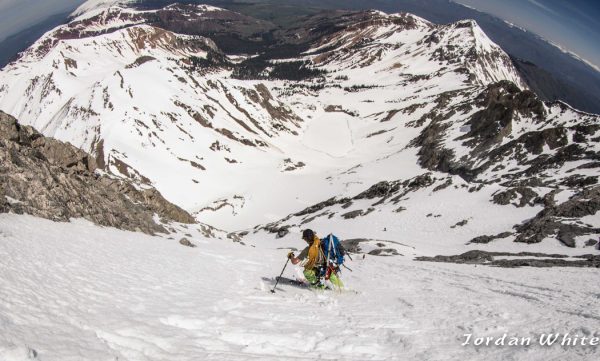 You only look cool if you have the rope on. 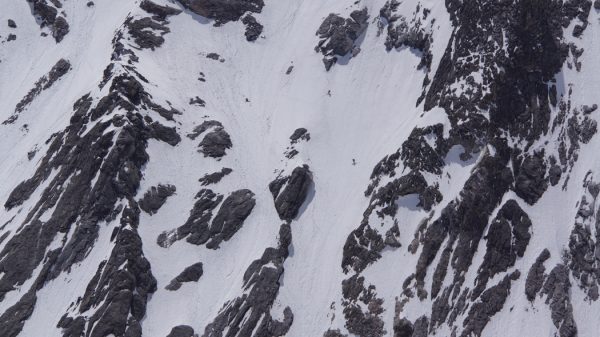 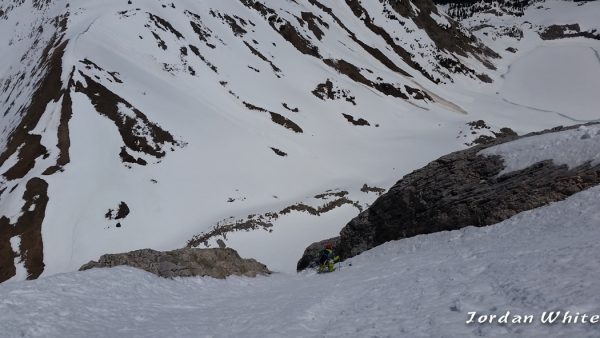 Skiing up to the edge of the world 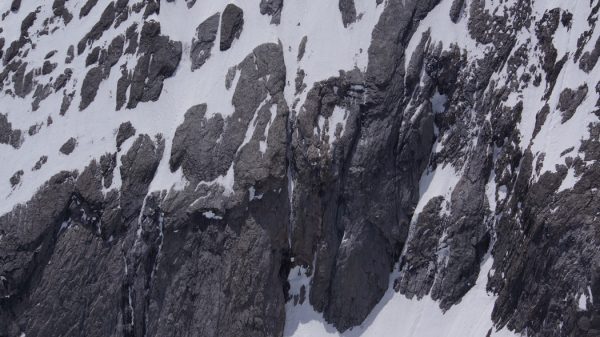 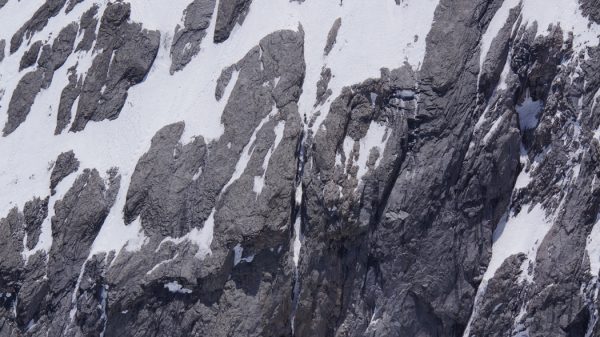 End of the road.

With a lack of rock anchors near the bottom of the snow we welded a couple of pickets into the super firm spring snow and equalized as an anchor. It’s rare to use pickets in Colorado until spring, but they proved to be an excellent solution here. As Colter was trying to transition for the rappel he lost a ski that went for the full ride down the 120 meter cliff and lodged itself in the apron far below. A 60 meter rappel brought us deep inside of a tube full of ice. But magically right near the end of our rappel there was a bomber crack that took a couple of cams perfectly and provided the ideal anchor to get us perfectly to the ground, albeit through a waterfall. We coiled ropes and headed off towards home. We stayed on snow until nearly treeline, and then loaded up packs and hiked the rest of the way out. 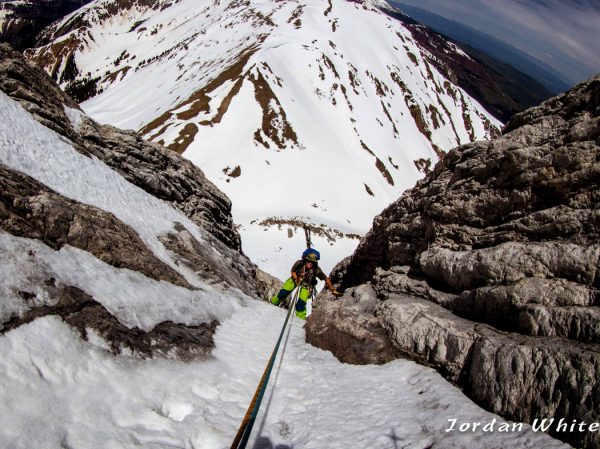 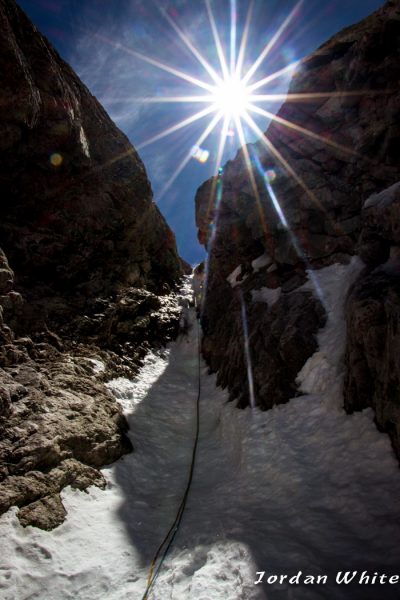 Riley coming down the Ice Luge. 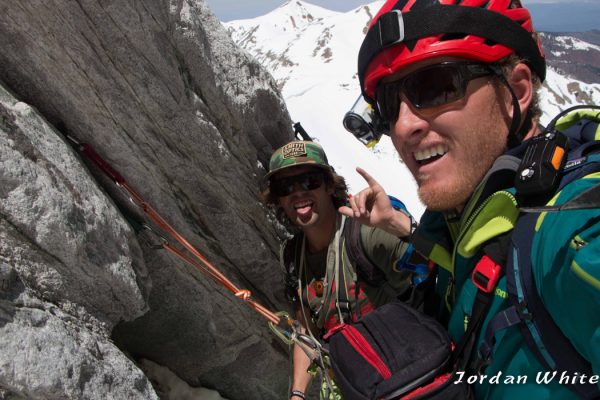 Hanging at the bottom rap station. 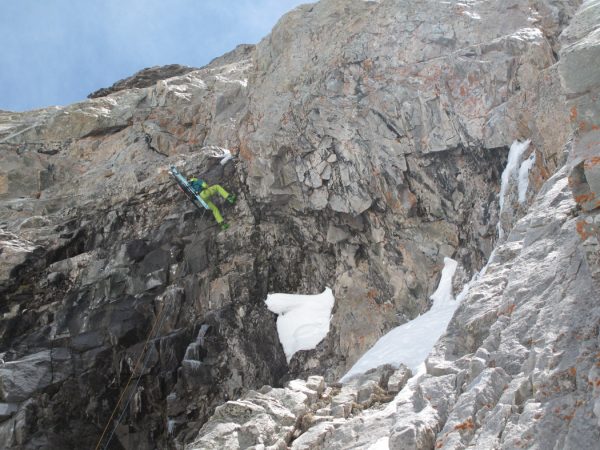 Me coming down the very last rappel. Photo Colter. 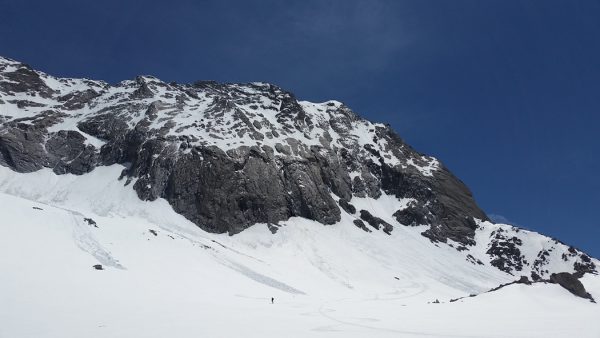 The easy turns of the day. Photo Riley.

Peg Leg will go down for me as one of the most exciting and challenging descents I’ve been a part of in Colorado, and I was happy to share it with good friends on a gorgeous June day. 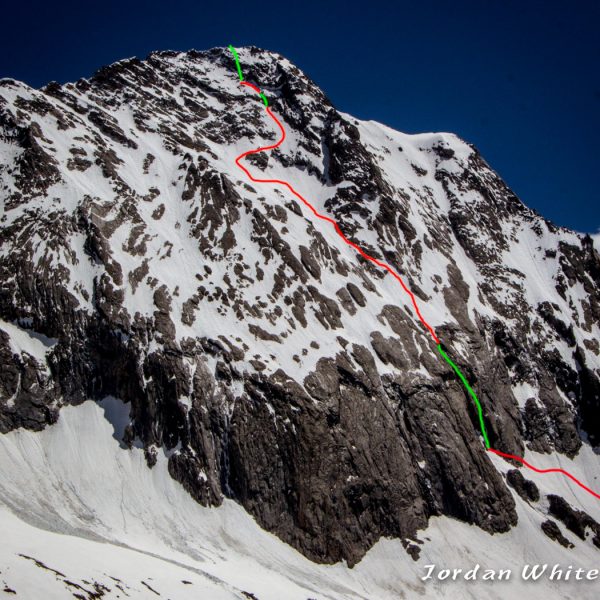