After the 320 Kilometer bus ride from Phnom Penh to Siem Reap, Cambodia we found ourselves a guest house just outside of the main village center. While you can always find something really nice if thats your preference, if you aren’t super picky, then staying in guest houses instead of hotels is often a great and much more affordable option. We stayed at the Bunlinda Hostel, but had our own private room, and we would highly recommend this place. The owner was exceptional and the rooms were as much as we could possibly need, and was super close to town. 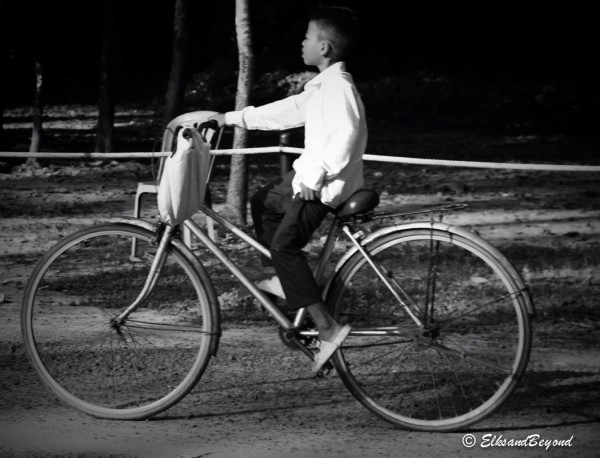 Watching this little guy getting on such a big bike was entertaining.

Arriving in the afternoon we spent the evening sampling the restaurants of the town and the different bars along the way. There is a night market here that at a minimum is at least entertaining, though like many places in Asia, once you have made it through the first 10-15 stalls you have seen most of what there is to see. Siem Reap is a nice little city of about 120,000 people, and offers plenty to keep you entertained, though the main reason we were here is to check out the historic Angkor Wat tours.

Sunset from the top of Elephant Hill near Angkor Wat.

The temples of Angkor were constructed primarily between the 9th and 12th centuries, and that speaks to the quality of building in that day, because visitors can still walk in and out of most of the halls and rooms of these ancient structures. On day one we rented some beater bikes from a local bike shop and rode the “small loop” vowing to make it through the medium and the big as well. The small loop starts out with riding a 2-3 miles out of town to the park. Signage isn’t great if you are on a bike, so be sure to hit up the main entrance to grab your tickets, or you will end up just like us and have to ride a mile or so back to the entrance to grab your tickets. The main road from Siem Reap isn’t the ideal one for biking. Perhaps its best to grab your tickets the night before if you have the time. Back on track we arrive at Angkor Wat and the massive moat that surrounds it. Ditching the bikes in some nearby trees, we walk our way into the temple that Suryavarman II erected as a tribute to the Hindu God, Vishnu in the 12th century at the height of the Khmer dominance. 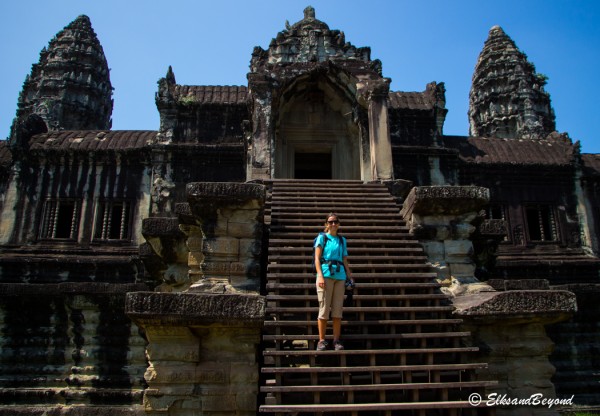 Elisabeth is excited for this. She is a structural engineer, and was looking forward to seeing this for a long long time. Here she makes the first of many climbs up steep staircases to explore the inner complexities of Angkor Wat.

Looking down into the courtyard from one of the upper reaches of the temple. 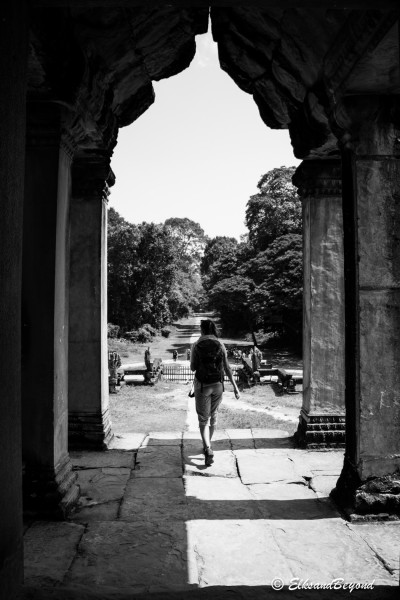 Elisabeth back in time. 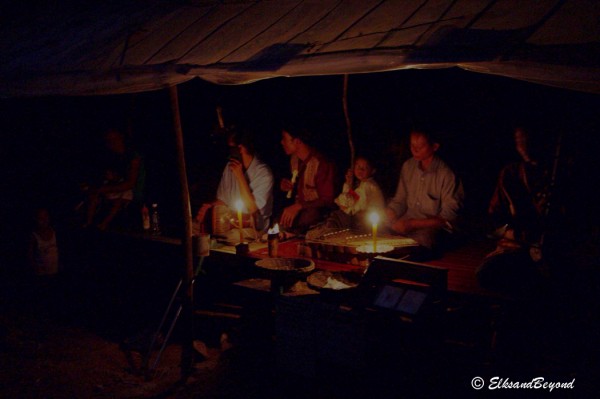 There seems to have become a tradition of Cambodians injured in Landmines, to have taken to music to try and support themselves rather than beg on the streets. We could have watched these guys for hours.

A short pedal up the road and we arrive at Banteay Kdei. Banteay Kdei was constructed in the 12-13th Century by Jayavarman VII as a Buddist Temple. Banteay Kdei is interesting though because it is mostly unrestored, and a great example of what the jungle can do to take its land back over. 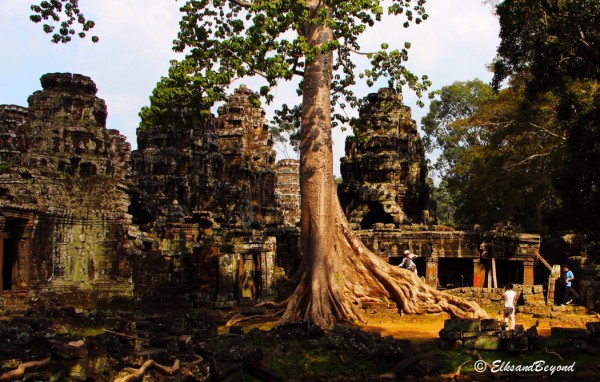 Right across the road from Banteay Kdei is Srah Srang a large reservoir with the slight remains of an island temple from the 10th and late 12th centuries. We came back here again for sunrise on another morning. 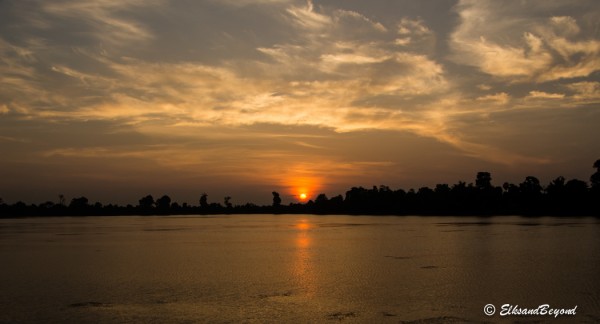 Back on our bikes for a quick pedal around the corner to Ta Prohm. If you have ever seen Tomb Raider this temple will look rather familiar. Ta Prohm was built in the 12th-13th centuries as a Buddhist Temple. Though fairly well preserved, the Jungle really has taken over here, evident by the trees growing over the walls and roofs of this Buddhist Monastery. 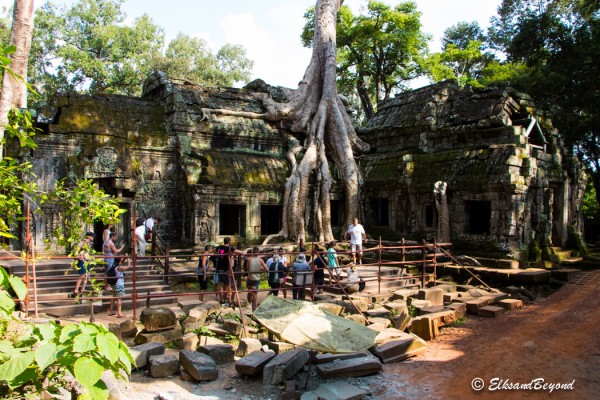 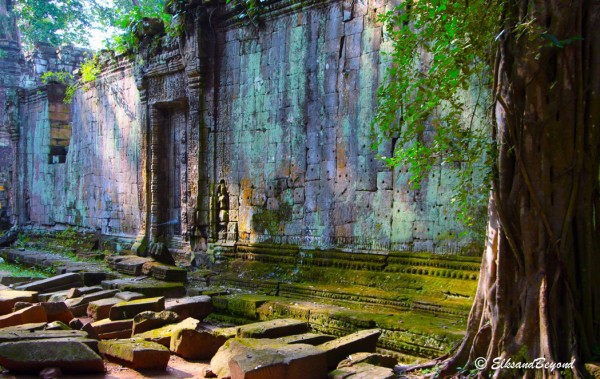 The battle with nature. So beautiful though. 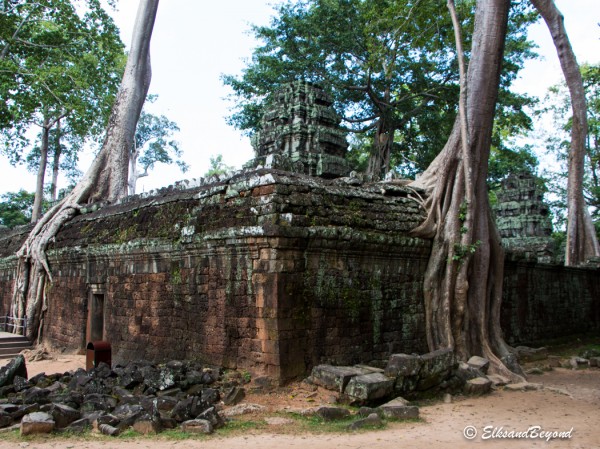 I took so many photos of walls like this. The way the trees use them to support themselves is incredible.

Nearing the end of our day still pedaling along we pass through the Victory Gate of Angkhor Thom, the last Capital of the Angkorian Empire. Angkhor Thom houses the temple of Bayon and Baphuon built in the late 12th century. 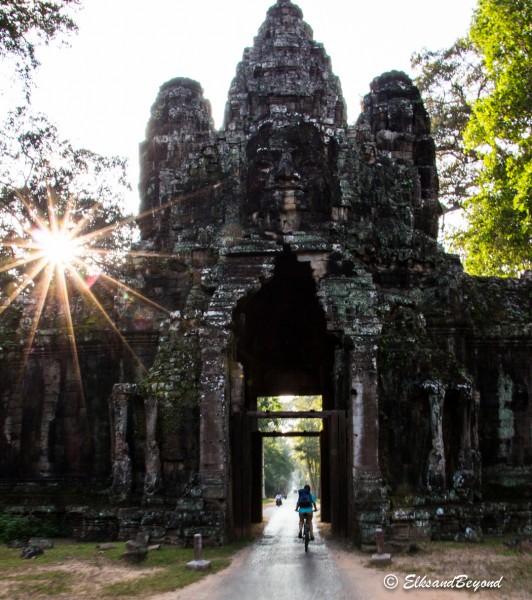 Elisabeth Pedaling through the victory gate of Angkor Thom.

Looking down on the entrance to Baphuon.

Leaving Angkor Thom for more exploration on another day we headed back to Angkor Wat for some evening light on its West Face. 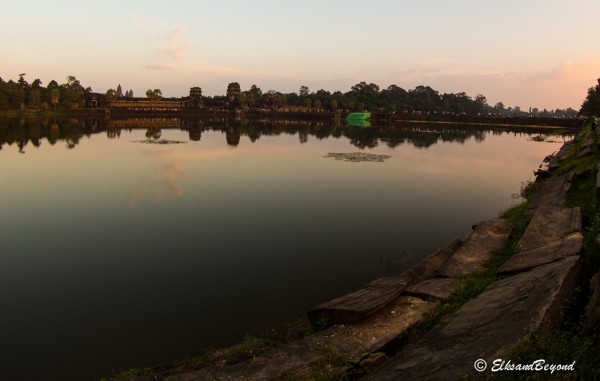 The evening Light on Angkor Wat.

Peddling back to town after a long day of Temple touristing. We are ready for a few beers and some more great local food. We headed to bed early with plans of doing sunrise at Angkor Wat the following day.

We had arranged at TUK TUK for day 2 of our tour as we had many more miles to cover. He agreed to pick us up rather early in the morning to make it out to Angkor Wat for sunrise. 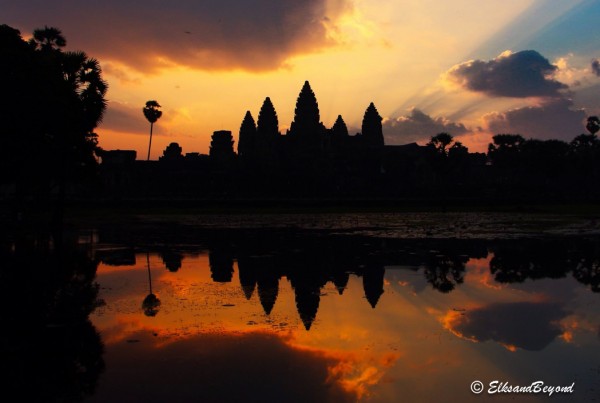 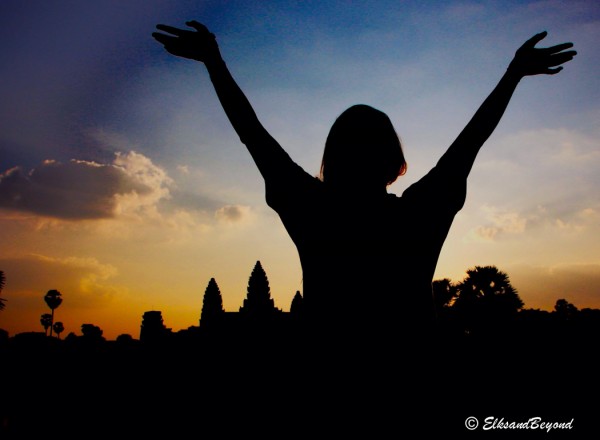 After taking enough photos to fill an entire hard drive, we hopped in the back of your TUK TUK and headed back to Bayon, not having felt like we saw as much of it the day before as we (well lets be honest, as much as Elisabeth wanted to.) I really do enjoy this sort of thing, but after a full day of it the day before and with 2 more planned, I’m getting antsy for something more. 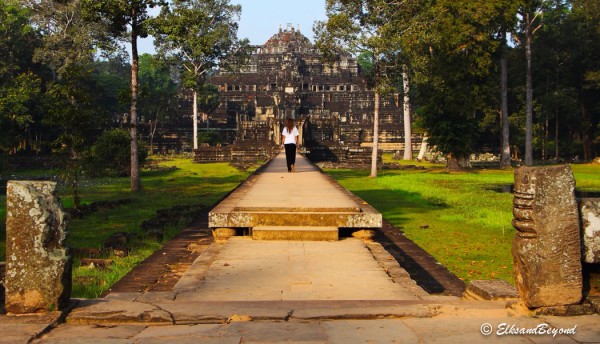 Elisabeth walking the walk into the Baphuon Temple.

Down the road we hopped back out of the TukTuk and had a quick walk around Preah Khan. Preah Khan was built in the late 12th century as a Monastary for 1,000 plus Buddhist monks. 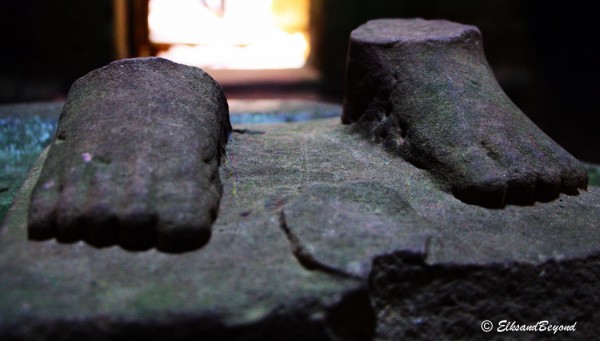 Whats left of a sculpture inside of Preah Khan.

Next up the road is Neak Pean. A small island temple built in the late 12th century as a protector of sailors.

Elisabeth checking out the edge of Neak Pean.

On to Ta Som 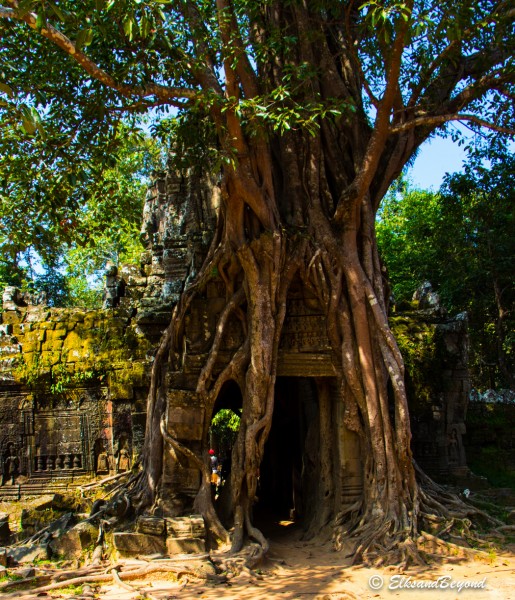 The Eastern Gopura of Ta Som being destroyed by a large tree.

A longer Jaunt through acres of rice paddies we end up at East Mebon, buit in the 10th Century as a Hindu Temple. The ruins are in a far greater state of decay than many of the newer temples, but it was quite a different style of contraction. 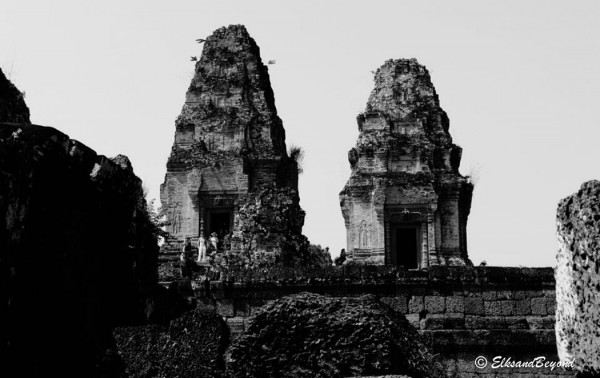 2 of the 5 towers dedicated to Shiva in honor of the kings parents.

Another temple down the road is Pre Rup, built in the late 10th century, 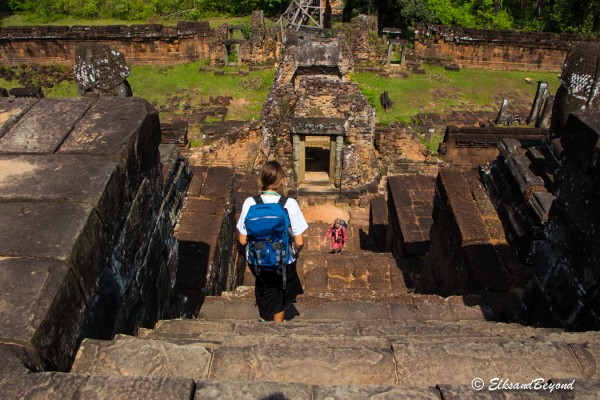 The stairs on all of these temples are all incredibly steep. Elisabeth dropping down off of the top of Pre Rup.

At this point I think we were both a bit “templed” out, so we headed back to town for some food and drink, and waited for sunrise to return back out to Elephant Hill. Obviously we weren’t the only ones with this plan as there were hundreds of people camped out on top ready for their chance to see the sunset.

Angkor Wat from the top of Elephant Hill near sunset.

Walking back down the hill to the TukTuk we are happy to have another beautiful day in Cambodia. 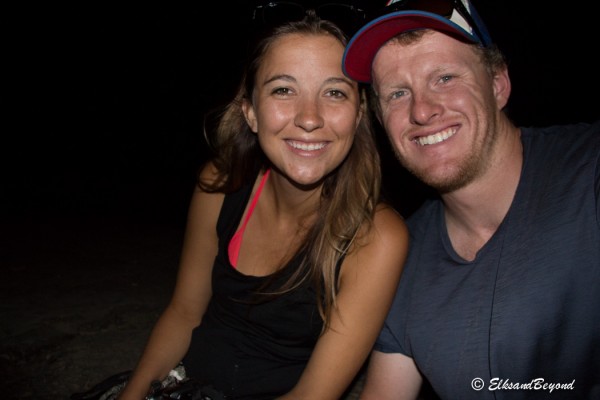 Its Been a good day. Riding in the TukTuk back to Siem Reap after dark.

The only thing I haven’t mentioned is the kids. They are somewhat exploited in this heavy tourist area. Their parents send them out with post cards and other trinkets and they try, really really hard to get you to by 1-2-3-4-5-6-7-8-9-10 postcards for onnnneeee doooollllaaaarrrr! It gets annoying for sure, and if you decide to entertain the idea of buying from these kids, be sure you want to go through with the purchase. 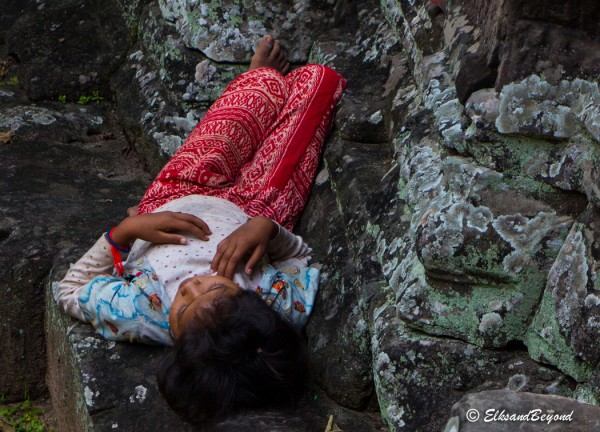 A young girl takes a break from trying to sell souvenirs to tourists.

The next morning we made a quick trip to Sra Srang for sunrise and then it was off to the airport for a flight to Sihanoukville for some beach time. 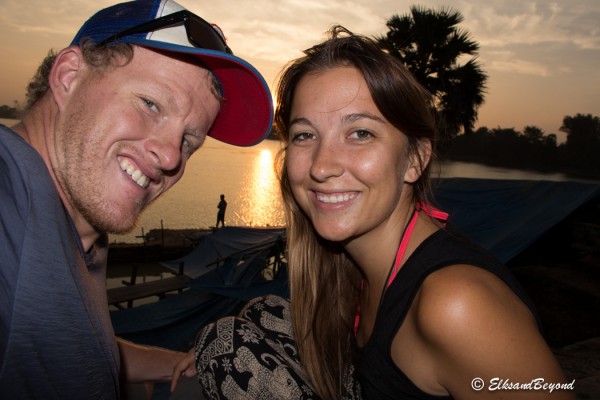 Elisabeth and I at Sunrise on our last day in Siem Reap.

Sled Mission during the Storm