As Elisabeth was starting to feel better from her little bout of sickness, we decided to leave the beach for Kampot and then Kep, Cambodia before making our way towards Vietnam. The weather looked to be changing for the rainier as we moved south, and as we arrived in Kampot we witnessed some of the heaviest rain I think I’ve ever seen. The streets turned into rivers, the Tuk Tuks looked like small boats, scooters like jet skis and biking was rendered nearly impossible. Here are a few photos from the floods, as I had a great time walking around and taking photos. 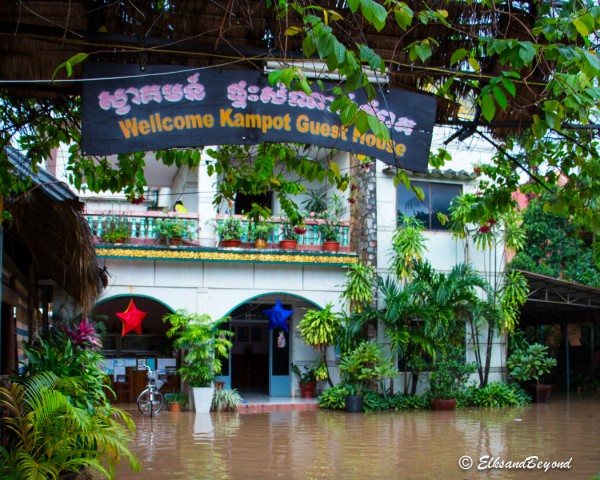 Welcome to the Kampot boathouse! But no seriously, this place was really nice and certainly recommended if you are in Kampot, Cambodia. 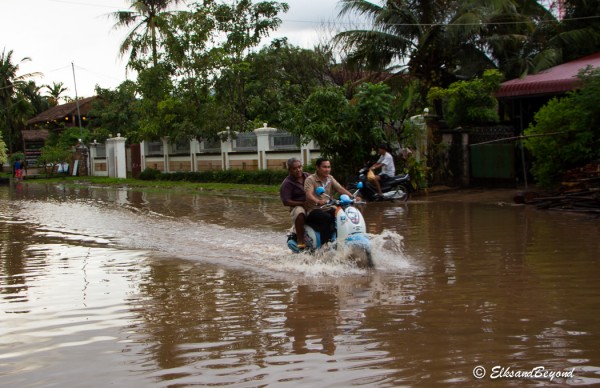 I wish I’d had a scooter to play with that afternoon. 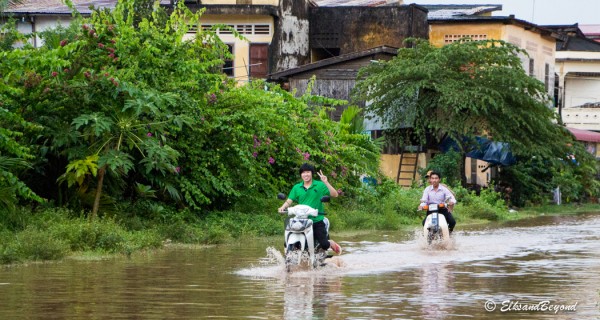 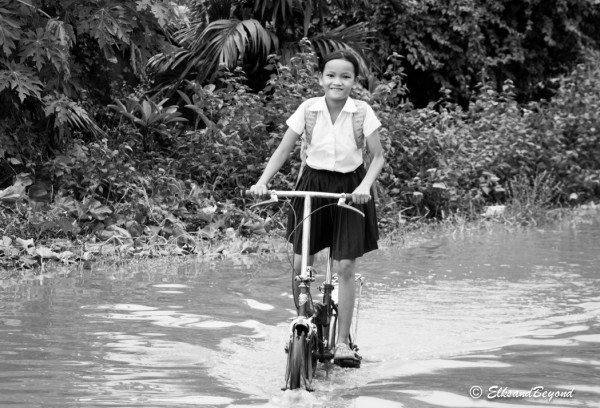 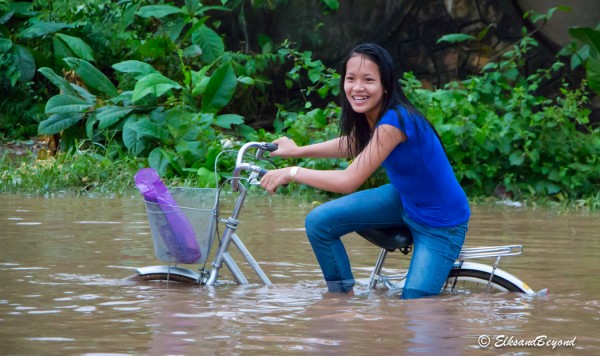 She got a little bogged down 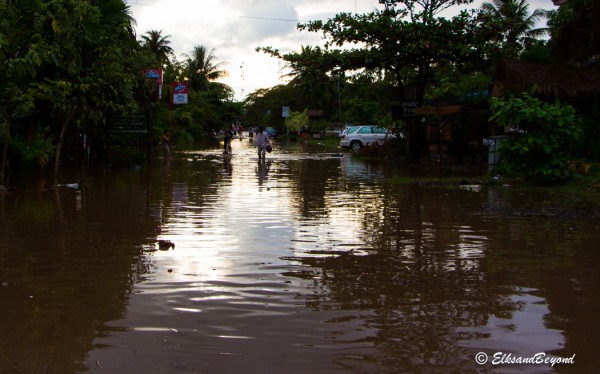 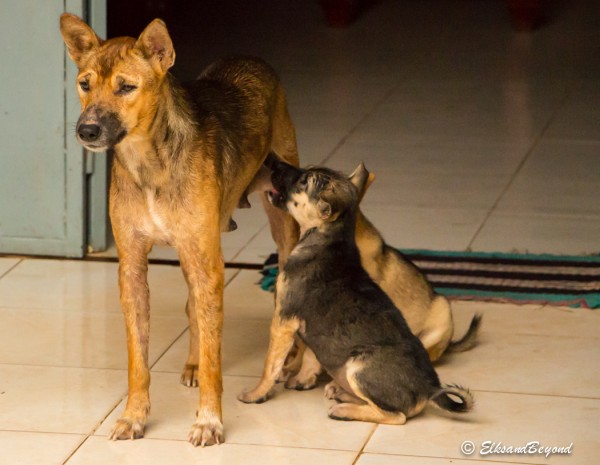 Mother and puppies staying dry on the porch of the guest house.

Later that night the rains subsided and the streets started to drain rather slowly. We walked downtown to find some food and beers, and found that the streets down next to the river drained much better and most places were open for business. The evening also made for one of the most spectacular sunsets I have ever seen. 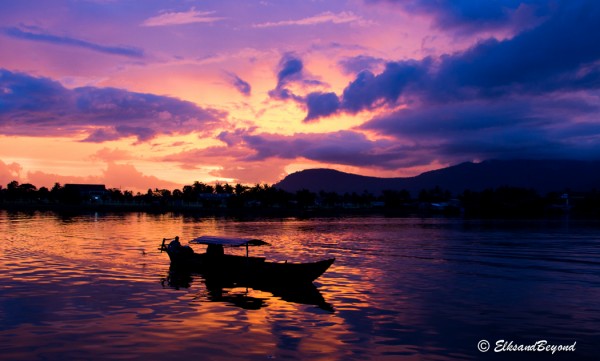 The sun sets as a river taxi comes in to drop off near downtown.

For us staying in Kampot was more of an accident than anything, as we were really trying to get to Kep. That said, we were both happy we stayed here for the night. The next morning we caught a bus ride to Kep to check out the crab fishing villages and surrounding countryside. Arriving in Kep at the bus stop, it took us a little while to figure out how to get to our hotel by means other than an expensive taxi. Eventually we got a TukTuk for a quick ride up the hill to the Bacoma Guesthouse. This place comes highly recommended from us. Great Value for the money. From there we rented a scooter and went exploring. We drove the laps around the coast near Kep, and visited the Crab market. We decided to take the long scooter ride all the way out to Wat Kiri Sela, a karst formation with hundreds of passageways and caverns that is part of the Phnom Kompong Trach. This was a long and dusty trip 28 km north of Kep. The kids there were very willing to be a tour guide, and were all competing for a chance to show us around. In the end we chose the kid who could speak the most understandable English, and we had a great time hiking and climbing around the mountains with him. If you are traveling Asia with the intention to go rock climbing, there is a lot of opportunity here. Check out Cambodias climbing site for more info. 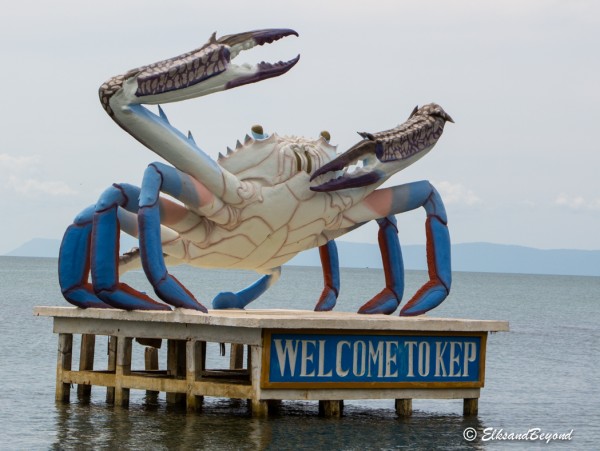 Every town has to have something to be famous for. 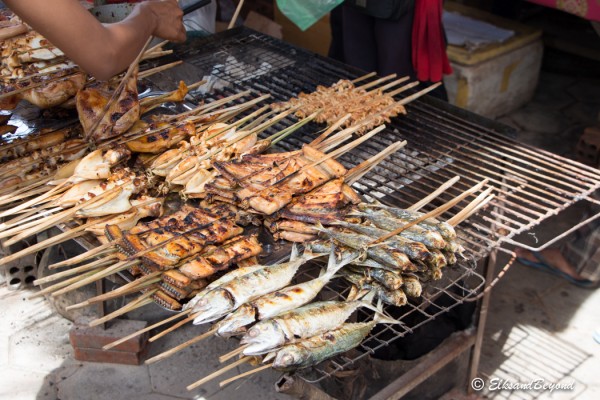 So good. So fresh.

Our tour guides in training. They hung in there until we had to wade through water in the dark caves. 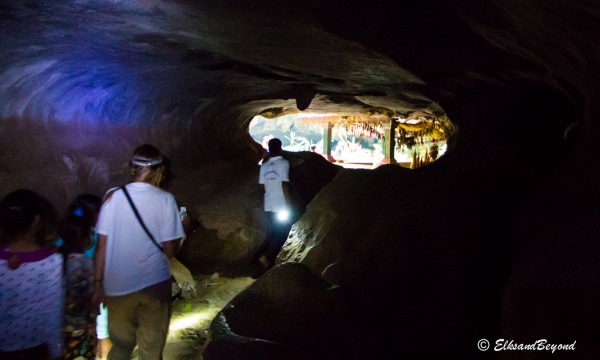 So many passage ways just like this. The water was to hight to explore some of them while we were there. 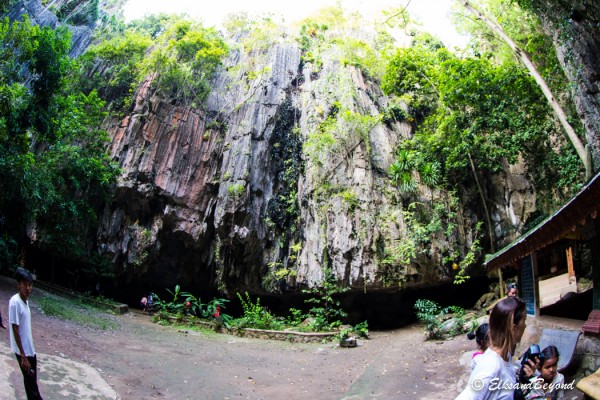 They all lead to this middle courtyard. It all felt like it was out of a movie. 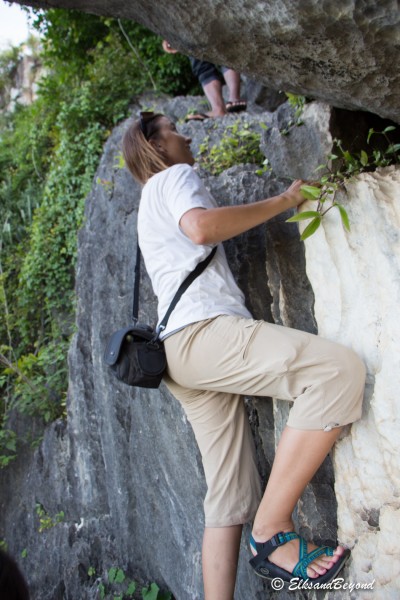 Lis doing some low class five climbing in her chacos to make it up to the ridge top. 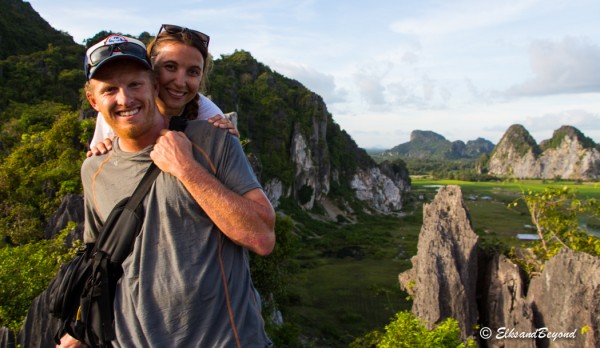 Elisabeth and I up on the top of the the ridge line. It was a little sporty on the way up and even more so on the way down. But certainly fun. Dah, our guide did the whole thing in paper thin flip flops. 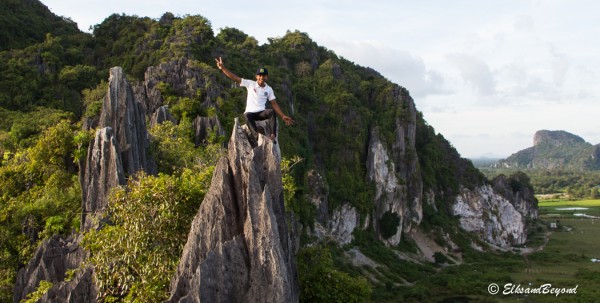 Our guide Dah. His English was pretty good, and he really enjoyed practicing it.

We got back into town as the sun was setting and headed out to dinner. We went to a highly recommended place called Kimly restaurant. It is easily the most money we spent for a meal the entire time we were in asia, but it was easily the best seafood I’ve ever had. In fact it is probably top 5 best meals I’ve ever had. Don’t miss it, and yes… splurge here. Just do it.

Next morning we hit the road again in a minivan packed to the brim traveling towards the Vietnam border, sad to leave Cambodia, but excited for the next country on our list.

Sled Mission during the Storm